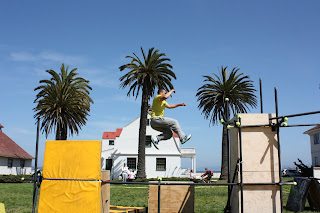 We are pleased to announce a new outdoor class run by Parkour Connections coaches. This class will be held Saturday mornings, 11AM, at Dolores Park in San Francisco.

We welcome anyone (18 and up) who is interested in the discipline of parkour to attend. The class will focus on the fundamentals of parkour, which means there will be a fair amount of conditioning! Get ready for one hell of a workout, as well as learning the skills to quickly and creatively move through your environment. $20 for 60+ minutes of instruction.

Where: Dolores Park in San Francisco (meet at the tall palm tree in the center)
When: Saturdays, 11AM to noon
Who: All skill levels (even absolute beginners!) 18 and up

Registration is appreciated, but not required. Sign up by contacting us at info@parkourconnections.com.
Posted by Albert at 2:05 PM No comments:

If you've been involved in the SFBay Area Parkour scene in the past few months you've probably already heard of Parkour Connections. We started PKC to create an organization to legitimize and consolidate the parkour coaches in the Bay Area, as well as develop a strong coaching program, build training equipment, and run parkour-related events.

We've done well over the last year, holding some huge events, birthday parties, workshops, outdoor classes, and a bunch of other things. Many of you have come out to help us set up, spot kids, and teach, and - I can't say this enough - we couldn't have done this without you. Parkour Connections was never meant to be just us. From the beginning, one of the major goals was to create a Coaches Association where we could share lesson plans and coaching ideas with other parkour instructors as well as spread what we've learned to traceurs who would like to begin a coaching career.

We're getting to the point where we feel we have enough information to share and enough events going on that we are ready to start a real Coaches Association, and we're inviting you guys to join in. This isn't for everyone; coaching is an entirely different skill than just doing parkour. While we expect parkour coaches to be active traceurs, we will also be stressing the importance of time management, kinesiology, safety, public speaking, group management and other skill sets that go beyond everyday training. We hope that as a group, we will be able to learn together and create highly effective coaches that can start a parkour program in any gym.

For now, please check out our site www.parkourcoaching.org to sign up. We may not be able to accept everyone at once, but if you sign up we will get back to you with an application in a few weeks, and let you know how the Coaches Association is going to work.

Thanks!
Posted by Anonymous at 10:37 PM No comments:

Parkour Connections at Life is Living 2011

After a couple rainy days, the weather cleared up just in time for the Life is Living festival in Oakland on Saturday a few weeks ago. This was our second year participating. We brought out the PKC Mobile Parkour Park once again with a bunch of new obstacles to work with, and the kids at the festival had a blast. Life is Living is an organization that promotes community building through art, music, and environmental justice - which means we were in some great company as we got to share the excitement of parkour among concerts, graffiti art, skate parks, and more. 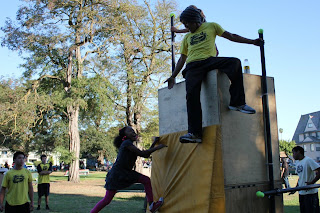 What's more, we were joined by members of the Bay Area parkour community in the Parkour Connections Network. They did a great job keeping kids safe, explaining parkour, and inspiring everyone with some amazing movement. 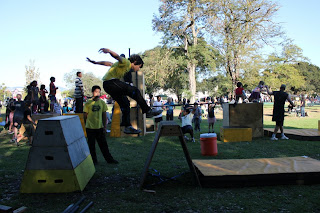 We set up several stations including the ever popular balance beam swordfights. But it was mostly kids - parents, don't be shy, you can totally jump in. 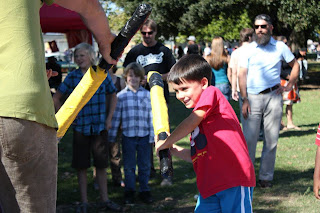 See more photos on the facebook album.
Parkour Connections does classes, workshops, and birthday parties! Contact us to find out how we can bring safe parkour instruction right to your backyard.

If you were at Life is Living and enjoyed the Mobile Parkour Park, please let us know on our Yelp page. And keep an eye on the blog for more event recaps and articles on parkour. For email updates, subscribe to our mailing list.
Posted by Albert at 8:11 PM No comments:

A few weeks ago, Parkour Connections was invited to participate in AirFest 2011, the anniversary event for House of Air. House of Air is an indoor trampoline facility by Crissy Field in San Francisco. Their jumpers explore and push the limits of what the body can do - just like traceurs, but with a little more air time. So as a celebration of what they do, we brought our Mobile Parkour Park to Crissy Field and set up a huge setup to show them how the parkour world interprets freedom of movement. See even more photos on our Facebook page. Tons of kids at AirFest 2011!
It was a great day in San Francisco with a clear view of the Golden Gate Bridge. AirFest had a great turnout of kids and adults in a family friendly atmosphere. 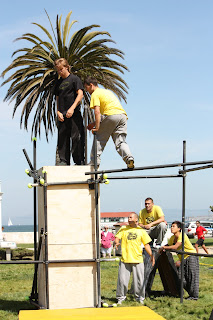 Testing out the Big Tower.
The latest addition to the Mobile Parkour Park made its debut - an 8 foot wooden tower perfect for climbing, wallruns, and epic jumps (on to our fluffy mats, of course). 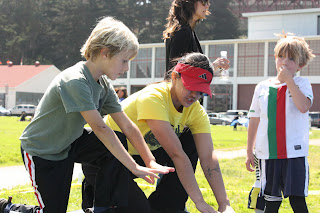 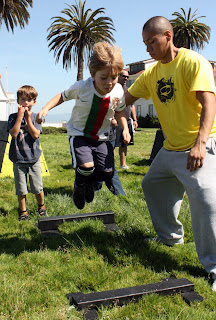 Raul Piscoya spots a precision jump.
Throughout the course of the day we had several demos to showcase the amazing talents of the Bay Area parkour scene and the Parkour Connections demo team, as well as short workshops to give the audience a taste of what a parkour class entails. In between was a ton of interactive playtime where Parkour Connections volunteers supervised kids as they jumped, crawled, and climbed on the structures. 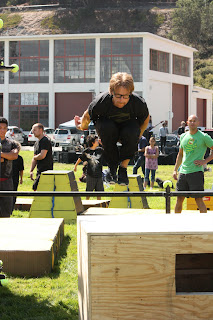 Brian Orosco's mustache
Special thanks to Andrey for choreographing the demos and superstar Brian "NoSole" Orosco for making a guest appearance! And of course we couldn't have done it without the help of volunteers from the SFParkour community.

Miss Parkour Connections at AirFest? We'll be doing another festival in Oakland this weekend. Come check us out from 2-5PM at Defremery Park in Oakland for the Life is Living festival.

Parkour Connections does classes, workshops, and birthday parties! Contact us to find out how we can bring safe parkour instruction right to your backyard.

If you were at AirFest and enjoyed the Mobile Parkour Park, please let us know on our Yelp page and subscribe to the blog for more posts about Parkour Connections events, as well as articles about the community, training, and other projects. For email updates subscribe to our mailing list through subscribe@parkourconnections.com.
Posted by Albert at 12:08 AM No comments: 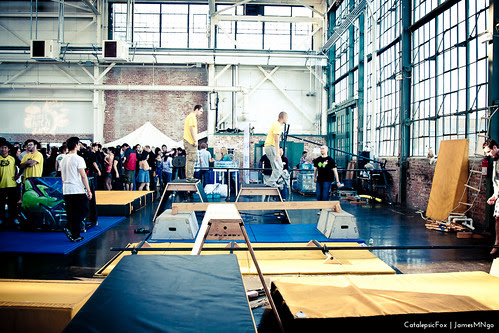 Just this last weekend, Yelp did a big event in the Richmond Craneway Pavilion called Sunset Showdown, showcasing local vendors and performance groups. We stepped in with a truck full of equipment, laid it out in a 30x30 space, and led members of the estimated 4000 Yelpers in attendance through some basic parkour techniques. After the time it took to set up, test out the equipment, play around, and run the event for 4 hours, I know I was totally exhausted, but it went really well and everyone who stopped by to watch was given a really solid introduction to parkour and all the places it can take you.

The only downside I can think of is that we were kept so busy talking to the attendees that we didn't really get to try out much of the amazing food that the vendors were putting out. We still got to see some cool musical and aerial dance performances.

Thanks to Raul, Chris, Justin, Andrey, and Laura for helping us out. Hope you guys had as much fun as we did. Next time we'll try to bring even more coaches and community members with us.

Take a look at the official Yelp pics of the event here, and Raul's photos here. And don't forget to check out the Parkour Connections Yelp page, maybe give us a review ;)
Posted by Albert at 8:11 PM No comments: 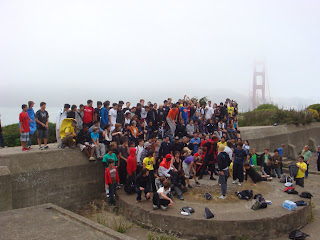 It is officially over! However, there are still things to do to wrap up the biggest jam ever held in the Bay Area, such as writing recap posts like these and rounding up all the amazing photos people took.

We can officially say, though, that we have successfully organized the largest parkour event on the West Coast, and one of the largest in the United States, despite the fact that this is our first time hosting anything "international." Throughout the many years that the SF Parkour community has been around and the time that we organizers have been a part of it, we have made many parkour connections traveling to other jams, hosting visitors, and interacting online. This is the payoff: around 130 of our friends came to train with us over last weekend from, from around the Bay, from the rest of California, from all around the country, and even from Canada, Mexico, and Brazil! We hosted them in our houses, took them to explore our favorite training spots, and gave them a sense of how vibrant the SF Bay Area parkour community is.

The majority of the organization and planning for this event was done by Parkour Connections, and the opportunity to organize an event of this scale was extremely rewarding. But most importantly, everyone had a great time. Several Parkour Connections coaches helped to lead groups and held a miniature beginner workshop for some of those in attendance who wanted a basic primer in parkour.

To say it was fun is not to minimize the fact that it also pushed many people to the limits of their physical endurance. We had training sessions set up from Friday until Sunday and by the last day at UC Berkeley, many people were content to keep the training light, considering that the previous day we had spent almost 14 hours at the event, spread between SF State University, Commodore Sloat Elementary School, Battery Godfrey (AKA The Bunkers), and Crossfit Marin. This is the kind of thing that leaves you sore but satisfied for at least a week afterward! 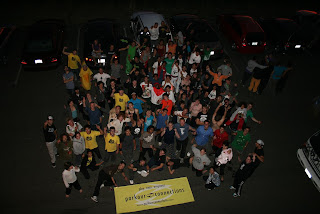 Jams like these are what drove us to create Parkour Connections in the first place. There is nothing more gratifying than seeing so many people meeting new friends, running around in the sun, learning to move in new ways, and pushing their limits. This is what we hope to be able to share with the rest of the world by introducing them to the discipline of parkour and the wonderful worldwide community behind it.
Posted by Albert at 12:24 PM No comments:

Parkour Connections was in Colorado back in April and invited APEX Movement instructors to come by the Bay Area and lead some parkour seminars in Crossfit Marin. They'll be hanging out and jamming with everyone at UC Berkeley on Saturday afternoon, and then leading a beginner and an intermediate workshop over at Crossfit Marin on Sunday. These guys have been teaching parkour programs longer than almost anyone in the United States so there's a lot to learn from them, and it's only for one day! Be sure to check it out.

Take a look at the threads and event pages below for more info.